Hawaiian Pizza, that salty and sweet combination, is a legitimate form of pizza and don't let anyone tell you otherwise! With an easy crust and marinara for the sauce, pizza just got easier, and more delicious!

There is a lot of controversy over whether a Hawaiian Pizza is in fact a true pizza.  Believe it or not, this controversy spilled over into the presidential election process in Iceland in 2017, with the President of Iceland declaring that he was fundamentally opposed to pineapple as a pizza topping.  He went so far as to "joke" that, if he could, he would BAN the topping from pizza altogether!  Well, that's too gosh darn bad.  Salty and sweet is a classic combination and I want it on my pizza!

In this recipe, we will be making our own pizza dough.  If you've been following along with my blog, you know that pizza dough was one of the first yeast recipes I ever tried.  I've tinkered with it over the years and have developed this relatively foolproof method.  As long as you have some yeast, some flour, and some warm water, you're practically done already.  I'll walk you through the steps and you'll be a pizza master in no time!

This recipe makes one delicious  sheet pan pizza. You can even split the dough and make 2 smaller pizzas! You can even make pizza in your cast iron pan.

Make it a Pan Pizza!

To make pizza in a cast iron pan you'll want to divide your dough in half before rising. You can refrigerate or freeze the other half of the dough, or make 2 pan pizzas! Heat your cast iron pan in a 500° oven for 10 minutes, add 1 tbs olive oil and then plop your dough in the pan. 𝘾𝙖𝙧𝙚𝙛𝙪𝙡𝙡𝙮 (🔥) spread your dough to the edges and add whatever sauce and toppings you heart desires.

Bake at 500° until the crust is puffy and the cheese is all deliciously melty (about 10-15 minutes). Tah-da 🎉 PAN PIZZA! You’re welcome. 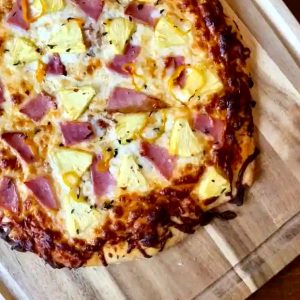