Homemade seasoning gives this Cajun Salmon Pasta a spicy kick of flavor, for a quick delicious dinner! Ready in less than 30 minutes, with a bright creamy sauce, it's a meal you'll want to make again and again!

Anyone who knows me knows that I love to putter around in the kitchen - chopping, slicing, dicing, and generally playing around with my food. I don’t like to rush things. Taking my time while making a meal is one the many things in this wacky life that brings me joy. But sometimes, even I need to get something on the table in a hurry.

So what if I was binge watching old Survivor episodes and forgot about time until I started to feel a little woozy from hunger? That’s where this delicious cajun salmon recipe comes in. It’ll be ready in less than thirty minutes from the first dice to delicious dinner! But, I guess should probably have a piece of cheese first, so I don’t pass out... But then it’s on!

The cajun seasoning is something you can make ahead and keep on hand in an airtight container. The recipe makes half a cup or so, and you only need about a tablespoon total for the full meal. So if you want to use store bought cajun seasoning, I think that’s fine. But if you want to make your own, it’s amazing on fish, chicken, steak, even vegetables. You’ll totally get lots of use out of it, with all its tasty goodness. Plus, you made it yourself! That makes it more delicious. 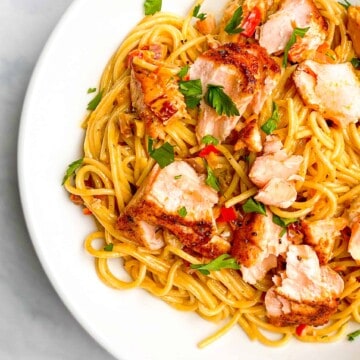