Better than Basic Brown Butter Blondies start with a blondie recipe that you can make your own. Then just look in your pantry and let the adventure begin!

Why you need Better than Basic Blondies

There are few things I like less than starting to cook or bake something and realizing I don't have all the ingredients. It's happened to me more times than I care to admit. It's also the main reason I always tell you to gather and prep all of your ingredients before you start anything in the kitchen (mise en place, en français 🇫🇷).

I'm here to help you perfect the basics so you can show off your improv skills. So, over the next few months I will be sharing a new series of recipes for the forgetful, for the poor planner, for the lazy, for the pants averse, and even for the adventurous culinary soul.

I believe that having a handful of solid base recipes can lay a terrific foundation for anyone who is just trying to figure it out; so let's jump into my collection of base recipes for those of us who do what we can with what we have, starting with my Better than Basic Blondies!

Good question, Young Padawan. Blondies are essentially brownies without the chocolate. While brownies are all about that rich chocolate, blondies are more reliant on vanilla for their warm flavor. They are also popular for their deep molasses taste from the brown sugar. Really, blondies and brownies are like second cousins, twice removed.

What are the main ingredients in Blondies?

Do I have to use brown butter in these Blondies?

If you're not comfortable trying to make brown butter today, that's okay. Your blondies will still be amazing with good ol' reliable melted butter! However, to maintain the same fat proportion in your blondies you'll  need to decrease the amount of butter listed in the recipe by 3 tablespoons. Why? Good question. This is because the volume of butter decreases by about 20% when you are browning it, as the water portion evaporates during the process (science is cool 🧪). So, if you decide to use regular butter instead of browned butter, you will need to decrease the amount of butter by 3 tablespoons to account for that 20%. Make sense? Cool. Still confused? Just follow the directions. You'll be fine.

What can I add to my Better than Basic Blondies?

What do you want to add? I would say you can add almost anything you want as long as the add-ins: Add up to 2 cups and don't add extra liquid to the blondie batter (for example, adding one small banana should be fine, a glass of strawberry milk probably won't). I couldn't possibly think of every single blondie add-in combination, but here's a list of fun ideas, along with a few of my own batches of deliciousness:

That should get you started on a few ideas. First, make sure you have butter, sugar, eggs, vanilla, and flour. After that, your only limit is your imagination, and your pantry!

This recipe makes one 13X9 pan of blondies. If that sounds like too much, all of the ingredients are listed by weight. Just halve the recipe and bake in an 8X8 or 9X9 inch square pan for 20-25 minutes. 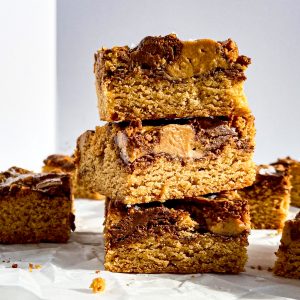