This recreation of the Mexican Caesar Salad at El Torito Restaurant has crispy romaine lettuce and hearty kale and is tossed with a tangy cilantro and pepita dressing with just a touch of heat.

Did you know that the original Caesar salad has its origins in Mexico? Developed by Caesar Cardini, in Tijuana Mexico, it was a desperation salad that came together during a rush in his restaurant, from whatever ingredients he could pull together. My Mexican Caesar Salad pays homage to these roots with the same bright and refreshing elements of a classic Caesar salad with a Mexican twist!

How do I make this Caesar Salad? 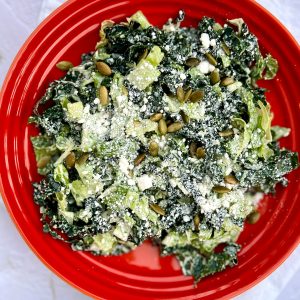 If making side salad servings, replace one head of romaine with the kale.