These Banana Apple Cider Donuts, made with boiled cider, are rolled in cinnamon sugar, dipped in a maple glaze, and sprinkled with cinnamon sugar walnuts for all the tastes and textures of Fall!

Everyone is all about pumpkin this time of year, and I'm not hating on their love of that, but for me it's prime apple season! Whether it's in a dessert, like my French Apple Cake with Almonds, a hearty meal like my Breakfast Chops with Maple Apples, or these Banana Apple Cider Donuts, apples are my Fall obsession!

Most of the ingredients in this recipe are pantry staples. The bananas add sweetness, with less sugar, the reduced apple cider adds a deep warm flavor, and the maple glaze take you straight into Fall in an apple orchard in Vermont. Gather everything together - it's time to make donuts!

I try to make all of my recipes as accessible as possible, but here are a few substitutions you can make if you're missing or can't tolerate an ingredient.

I think these Banana Apple Cider Donuts are perfect just as they are, but here are a few ways you can customize these to your tastes

Follow these simple steps to the best apple cider donuts of your life!

1. Bring apple cider to a boil in a small saucepan then reduce to a simmer. Keep simmering until reduced to ½ cup, checking amount at 10 minutes, and every 5 minutes, until required volume is reached.

3. Mash banana with fork or whisk until fairly smooth. Some small chunks are fine.

4. Whisk banana together with eggs, vanilla, and reduced apple cider until fully combined.

5. Drizzle in melted butter and continue to whisk.

7. Fold all ingredients until just combined. Some visible lumps are fine. Transfer batter to a disposable pastry bag, or a large zip top bag.

8. Pipe into donut pan using disposable pastry bag or zip top bag with one corner snipped. Bake at 350°F for 12 to 15 minutes. Cool donuts in pan 5 minutes, then transfer to wire rack.

10. Whisk all of the glaze ingredients together until smooth.

11. Whisk cinnamon and sugar together in a small bowl. When cool enough to handle, turn donuts in cinnamon sugar. Let cool completely on wire rack.

12. Dip the tops of fully cooled donuts in maple glaze.

Finish with a sprinkle of cinnamon sugar walnuts, if desired. Delicious!

I use two of this Wilton nonstick donut pan to make these donuts. If you don't have one, you can bake these in a standard muffin pan, baking for 18 to 20 minutes. You should get 8 or 9 muffins.

When reducing cider, after 10 minutes, pour the cider into a measuring cup to check the amount, and then pour back into the pan. Continue doing this every 5 minutes until you have ½ cup. If you accidentally over-reduce, just add a bit more cider until you have the proper amount. This whole process should take 20 minutes

You can reduce your cider up to 5 days in advance, storing the boiled cider in an airtight jar.

If your glaze is too thick, add more cream, one tablespoon at a time, until you get the perfect dippable consistency. If it's too thin, add a couple more tablespoons of powdered sugar, until just right.

How do I store these donuts?

The donuts are best eaten the day they are baked, but can be stored in an airtight container for up to 2 days.

Can I reheat glazed donuts?

Once the donuts are glazed, I would not recommend reheating them, or the glaze will melt. If you know you'll be making these to eat later, skip the glaze until ready to serve. Microwave for 10 seconds, dip in glaze, and enjoy warm.

Can I make this recipe in a small batch?

Yes! Use the servings button on the recipe card (next to the ingredients) and click on the .5x option. You can also double the recipe with the 2x option.

Did you try this recipe? Tell me all about it!
Leave a ⭐️ review and comment below!
Take a pic and tag @butfirst_webrunch on Instagram! 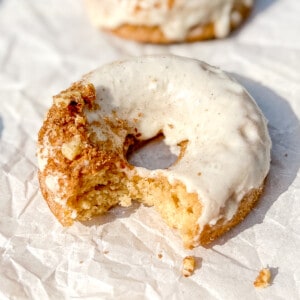