BLT Panzanella Salad is a play on a traditional Italian Panzanella salad of tomatoes and bread, with the addition of a roasted Tomato Bacon Vinaigrette.

I know that when most people think "salad" they think of lettuce and tomato, maybe a few carrots, some store bought croutons, and a jar of salad dressing. Not me. Since I'm really not all that crazy about lettuce, I have to think of ways make the salad more appealing to my taste buds.

A Panzanella salad is one amazing way to do that. Panzanella is a traditional Italian bread salad, normally just bread and tomatoes dressed with olive oil and vinegar. I take mine to the next level by merging it with The World's Greatest Sandwich, the almighty BLT.  There are multiple moving parts to this salad, but follow along and you'll see that none of them are complicated, and the payoff is DELICIOUS!

Some days when it’s hot as 🤬, turning on the oven is something I try to avoid during the day. On those days I’ll cook the bacon and make the croutons in the morning, when it’s cooler. Later, when it’s time to eat, I’ll just zap the bacon in the microwave to warm it. I also like to add some mixed greens to lighten things up a bit.

Finally, I forgo the oven roasted tomato dressing and sub in my easy poppyseed dressing. It has mayonnaise, but it’s still light and zingy! I added the recipe for the Poppy Seed Dressing to the recipe card, so you can have a bacon and bread salad anytime!!

Want to chill out with more salads? 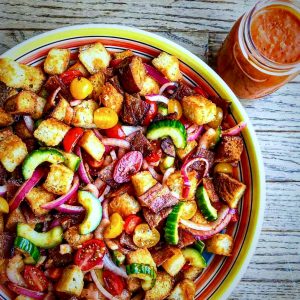