A crispy Naan Breakfast Pizza is less than 30 minutes away with this simple recipe. Perfect for breakfast, brunch, or even a quick afternoon snack!

Remember those days when you would wake up and eat cold pizza, straight from the fridge - while standing up? And you kinda liked it, but you also kinda felt bad about it? My Easy Naan Breakfast Pizza is a quick and delicious breakfast that will cure you of the shame of the cold pizza blues.

Full disclosure: when I met The Boy (my husband) all he had in his fridge was beer, a pot of beans with a spoon still in it, and pizza. A couple of pizzas. He would wake up, crack open a beer (if it was after 12 - he wasn't an animal), and eat a cold slice of pizza while standing at the kitchen sink (so he didn't need a plate). I swear, I saved that man from himself.

These flatbread pizzas are the solution to his morning walk of shame. Y'know, the one from his refrigerator to the kitchen sink. Say goodbye to sad, solo, cold morning pizza, and say hello to Easy Naan Breakfast Pizzas. And guess what. They're even good cold!

What you'll love about this recipe:

Bacon and egg pizza. Who knew?! You can customize your breakfast pizza any way you like. If you don't want the egg, take it off and add more of what you do want! Make it meaty or make it vegetarian. The world is your Pizza!

Start by preheating your oven to 450°F. Place a large sheet pan in the oven to preheat for every 2 pizzas you are going to make. This will help the bottom of your Naan Pizzas get crispy and brown - and yummy! Now let's make pizzas!

After fully cooled, either individually wrap in plastic wrap or place pizza in large ziptop bag. Keep in refrigerator for 3 to 4 days. To reheat, unwrap and place on baking sheet. Warm in a 350°F oven for 10 to 15 minutes, or until warm.

Can I use pizza dough instead of naan?

Absolutely! Although it takes additional time, this is pizza after all. Because the egg and other ingredients cook so quickly, you would need to roll out and pre-bake your crust ahead of time. I would recommend preparing your pizza crust the night before, up to a few days ahead. That way you can still make this a quick and easy meal or snack.

Can this be made vegetarian?

It sure can! If you are a lacto-ovo-vegetarian, you would just leave off the bacon and add any quick cooking vegetables that you enjoy, like mushrooms, olives, or green pepper. I think a Southwestern version with corn, black beans, and jalapeño would be amazing!

How about a vegan breakfast pizza?

Of course! I've never made vegan pizza before, but there are plant based shreds that can stand in for mozzarella and cashew cheese can replace the mascarpone. There are even vegan flatbreads on the market that can stand in for the naan, which traditionally contains milk or yogurt. You can find a number of vegan living resources on the internet that can help you make this work. 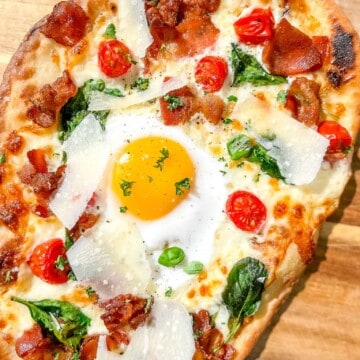