My Garlic Butter Naan is a soft and fluffy Indian-style flatbread with an airy interior and toasty exterior that you'll want to make again and again!

It's the last day of Summer y'all and I'm finally finishing my Mediterranean Dinner series. We started with my Greek Chicken Skewers with Tzatziki Sauce, accompanied that with my Greek Salad with Herb Marinated Feta, and we're going to "wrap" it all up in my Garlic Butter Naan. Wrap it up. Get it? I'm cracking up... I mean, I crack myself up 😳 (2020... )

I know, I know, Garlic Butter Naan is not a true Mediterranean flatbread (Hello Iran and India), but it's the one I like the most. I use it instead of pita, in place of tortillas, and cover it in pizza toppings. I think once you try making my Garlic Butter Naan for yourself, you'll find yourself making it naanstop.

Naan is an yeasted flatbread, commonly found in Iran and India and most of South Asia, that is traditionally cooked in a tandoor oven (think a really, really hot chimney that you use to cook food.)  It is usually served alongside curries, dips, or hummus, but I like to use my Garlic Butter Naan in so many other ways.

I've used naan to sop up the juices from braised beans and meats, as the base of some amazing pizzas, and I just love to wrap my Greek Chicken Skewers in warm Garlic Butter Naan.

I know pita is most commonly associated with Greek food, but I just love the texture of this naan! It's soft and fluffy, with an airy interior and tasty golden brown spots on the outside. If you're normally afraid to work with yeast (I've been there), my Garlic Butter Naan is the perfect starter bread. It rises quickly, rolls out easily, and cooks up like a dream!

This recipe makes eight Garlic Butter Naan, that will disappear in no time!

What do I serve these with? 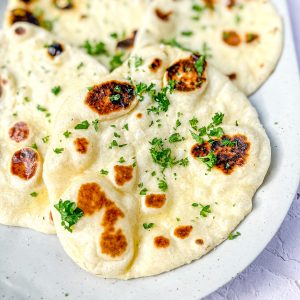