With a fluffy interior and a crispy exterior, this French toast tastes indulgent, but is so easy to make. It’ll bring everyone running to the breakfast table!

French toast is one of the few dishes that evokes an image of my father in the kitchen. He didn’t spend a lot of time there (he was a mow the lawn, play the guitar kind of guy), so there aren’t many of those. But he had his specialties: Biscuits and gravy, hard seared slices of Jimmy Dean sausage with scrambled eggs, and French Toast with lots of Log Cabin Syrup.

I hadn’t had French toast in years, when suddenly I found myself craving it to an obsessive degree. I set myself to the task and ended up making the best French Toast I can ever remember eating. (Sorry, Dad.)

The sudden appearance of French toast on this particular day came out of boredom. I needed an activity, I decided to make bread, I went fancy and made it swirly, thought about how that was too much swirly bread to “just eat”, made Cinnamon-Cardamom French toast. Welcome to Cynthia’s brain! It’s always buzzing in here. Mostly about food

Makes 1-8 servings, depending on who’s eating.

Want more ways to sweeten up your mornings? 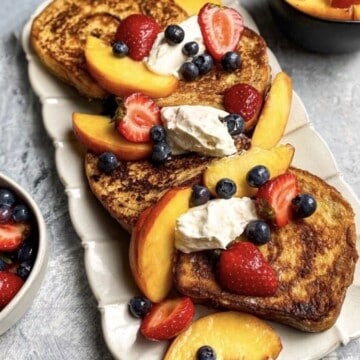 The Main Event: The Toast parts

Macerating the fruit (not as violent as it sounds)

The Frenching of the Toast

Can we make French Toast already?!