Why this Recipe Works

When my kids were little, I'd sometimes make them the simplest, but most delicious breakfast: toast, slathered in butter, and sprinkled with cinnamon sugar. Cinnamon toast! It was actually a cheap, homemade version of the Cinnamon Toast Crunch cereal they saw on TV. At the time, that was too pricey for me, and they were too young to fall prey to cereal peer pressure. So, cinnamon toast.

What you'll love about this recipe:

How to make this recipe

Your Cinnamon Toast Crunch French Toast is best eaten hot and fresh, when first made. As you may know, re-crisping something that is coated with breadcrumbs can be difficult without losing the crunch or drying it out. Leftovers can be wrapped in plastic wrap and refrigerated for up to 2 days. To reheat, place on a wire rack on a large sheet pan and place in a 350 degree oven until warm. They may dry out a bit during the reheating process, so syrup and fresh fruit will help you out.

Other ways to repurpose your French Toast include making a French Toast Casserole. Or you can use them as a sweet crouton topping in a fruit salad by cutting into cubes, and baking in a 400°F oven until crispy.

Love this recipe? Please leave a 5-star 🌟🌟🌟🌟🌟rating in the recipe card below & a review in the comments if you REALLY like it. Thanks! 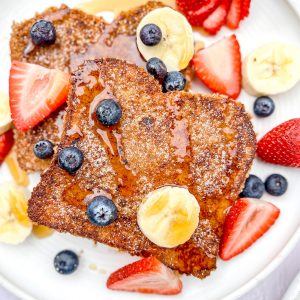