This zeppole recipe makes the most delicious, fluffy Italian donuts, with the addition of tangy lemon curd. Simple to make, they are amazing for breakfast or dessert.

Zeppole with The Boy

I had my first ever zeppole, fried Italian donuts, with The Boy on one of our first dates. He took me to an Italian bakery that reminded him of the ones he grew up with on the East Coast. Oh my. The Boy may have won my heart right there in that bakery.

The girl at the counter handed me a crumpled paper bag. Apparently, that's an Italian bakery thing. I reached in and took out a round fried donut, absolutely covered in powdered sugar. One bite and I groaned... and then coughed from all the powdered sugar I inhaled. Then I went in for another one and another one, until the bag was empty. Wouldn't you?

Since we were still in the "impress" each other stage of our relationship, I wanted to be able to make these for The Boy. Well, it took 30 years, but here we are. To avoid being compared to all the old school bakeries in Little Italy, I decided to fill mine with lemon curd, because that's a total Cynthia move. The Boy was impressed. No paper bag required. Worth the wait.

Don't fall for the hype. Making both the lemon curd and the fried zeppoles are so much easier than you've been led to believe. One step at a time, baby.

Can I fill my Zeppole with anything else?

Absolutely! If you can fit it through the piping tip, you can add it to your zeppole. Try Nutella, chocolate ganache, your favorite jelly, pastry cream, or keep the Italian vibes going with a fluffy cannoli filling!

What do I do with leftover oil? 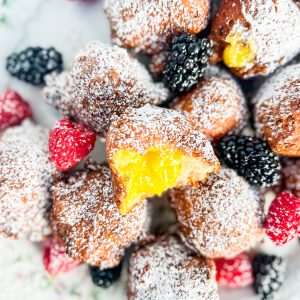