Salty, sweet, and crispy, Everything Seasoned Bacon is destined to become the only way you'll want to eat bacon!

There's not much labor to this recipe, but so much to love about the flavor.  Since the first time I made Everything-Seasoned Bacon, it has become the go-to bacon in our house. Salty from the bacon and the everything seasoning and sweet from the maple syrup glaze, this bacon has, well... everything! The Boy wants it on burgers, in BLTs, and on the side of all the breakfast stuff, because It. Is. Everything!

You can, of course, buy Everything Bagel Seasoning at your local Hipster Joe's.  That's fine.  But there's something quite satisfying about making something yourself, especially if you'll be using it a lot. And you will!   A note about my Everything Bagel Seasoning:  my recipe makes quite a bit, but I haven't found that to be a problem. So, mix it up, put it in a mason jar, and keep it close at hand! 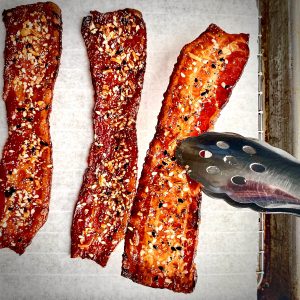 Everything Bagel Seasoning (This makes a lot, but you'll want it for "Everything"!)

The Meat and The Sweet

Making the Everything Bagel Seasoning