Made the night before and baked in the morning, these Overnight Cinnamon Rolls are so easy and delicious, you’ll never go back to the tube brand again!

You want Cinnamon Rolls when?

I have to be honest, in the past, the Winter Holidays were usually the only time I dared think about making cinnamon rolls.  There are usually at least 2-3 cinnamon roll worthy morning occasions in December alone.  We have two birthdays, at least two work parties (I work from home, so it’s always a party🎈), and let’s not forget Christmas morning.

Here's the thing, cinnamon rolls are not a spur of the moment pastry. They’re relatively easy to make, but you need time for the dough to rise, let alone bake, and I’m not about to get up at 5 am so someone can bring something in to work.  I love you guys but... 🙄

So I experimented with my regular cinnamon roll recipe and played around with letting it rise in the refrigerator overnight and they came out great!  By taking the dough out in the morning and allowing it to come to room temperature and “rest” for half an hour or so (go take a shower, have some coffee), your cinnamon rolls will come out puffy and delicious every time.

What are the ingredients for Cinnamon Rolls?

Can I use other flavors, besides cinnamon?

Absolutely! I've changed up the filling from time to time by adding Chinese five spice, pecans, and my favorite Chai Spices. I'm even considering some savory fillings that I'll share with you in another post!

Anyway, whether you make and bake today or put them away till later, you’re going to want to make these cinnamon rolls all year round!  That’s how you roll now 😉

How do I store leftover cinnamon rolls?

Cinnamon rolls tend to drying out rather quickly and proper storage is key to a pleasurable leftover cinnamon roll moment. The key to keeping them moist is all in the packaging.

How do I freeze leftover cinnamon rolls?

In the unlikely event you haven't eaten all of your rolls, you can store them in the freezer. Separate the rolls and place them, unwrapped, on a parchment lined plate or tray. Flash freeze them for about an hour. Remove from the freezer and wrap each roll individually in plastic wrap and place wrapped rolls in a large ziploc bag. Store frozen for up to 2 months.

How do I reheat my Cinnamon Rolls?

Lightly spread softened butter over the un-iced portions of the roll. Microwave 30-45 seconds on high. Add an additional 10-15 seconds at a time until warmed through, if needed.

Alternatively, you can reheat these in the oven. Preheat oven to 350°F. Lightly spread softened butter over the un-iced portions of the roll. Place in a baking dish and cover with aluminum foil. Bake for 10 minutes, or until warmed through. Enjoy!

Can I make cinnamon rolls without yeast?

This recipe requires yeast for the rolls to rise, but my No Yeast Biscuit Cinnamon Rolls are a great alternative. They are fluffy and gooey and delicious and ready to eat in an hour! 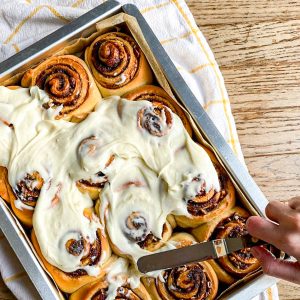 Frost the rolls and eat them so fast